So, macro. For some people,  macro means delving into a mysterious world not usually seen, but for most it means boring bug shots.

Although I love every aspect of wildlife and the natural world, I have to admit that until recently, when it came to photography, I fell into the later category.

Some of you may remember that last year I helped out with a couple of children’s macro photography workshops. They went so well that by the end of most sessions they were completely engrossed in taking photographs. Which resulted in me having time enough to take the photos like the one you see below.

So a year on and as a result of that successes, the RSPB made some adult macro workshops available, and I was asked to help lead them with my friend and boss, John. I was by no means an expert in macro but I knew my way around a camera and photography in general so I said yes. And I couldn’t be happier that I did.

Towards the end of the first session we were taken (by the RSPB guide accompanying us) to an area usually out of bounds for the public. By that stage in the day, as with the children, everyone felt that they had learnt something and were quite happy putting that into practice. So I got my camera out and gave it a go myself.

Unlike my usual type of wildlife photography I found myself being able to control the image a lot more than I can with birds taunting me in the distance or foxes hiding in frustratingly long grass. If something was in the way, I could move it, if the angle wasn’t right, I could move myself without disturbing the insect. To my surprise, I really enjoyed it. It was wildlife photography but without the stress and panic that comes with only having brief glimpses of what you waited hours for. The shot below (common blue damselfly) was what I came away with that day and is now the home screen on my phone, and possibly a piece for my upcoming exhibition in November (2017).

The next session confirmed that this relaxed feeling and heightened level of enjoyment was not fluke. Resulting in the image of a Skipper below.

With this new found perspective, I now had a couple of shots in mind that I thought quite achievable. The first was a shot showing a freshly emerged dragonfly and its nymph case as a mirror image. The second was a dragonfly or a damselfly front on with a thin piece of grass between its eyes. So I popped back to Pullborough (the RSPB reserve) during the week. I went early because I had been told that I would stand the highest chance of seeing emerging dragonfly’s in the morning. Information which turned out to be spot on, I saw four in just that morning.

The shot below is the result of an hour stood on one leg, slowing absorbing what felt like the entire pond into my sock. 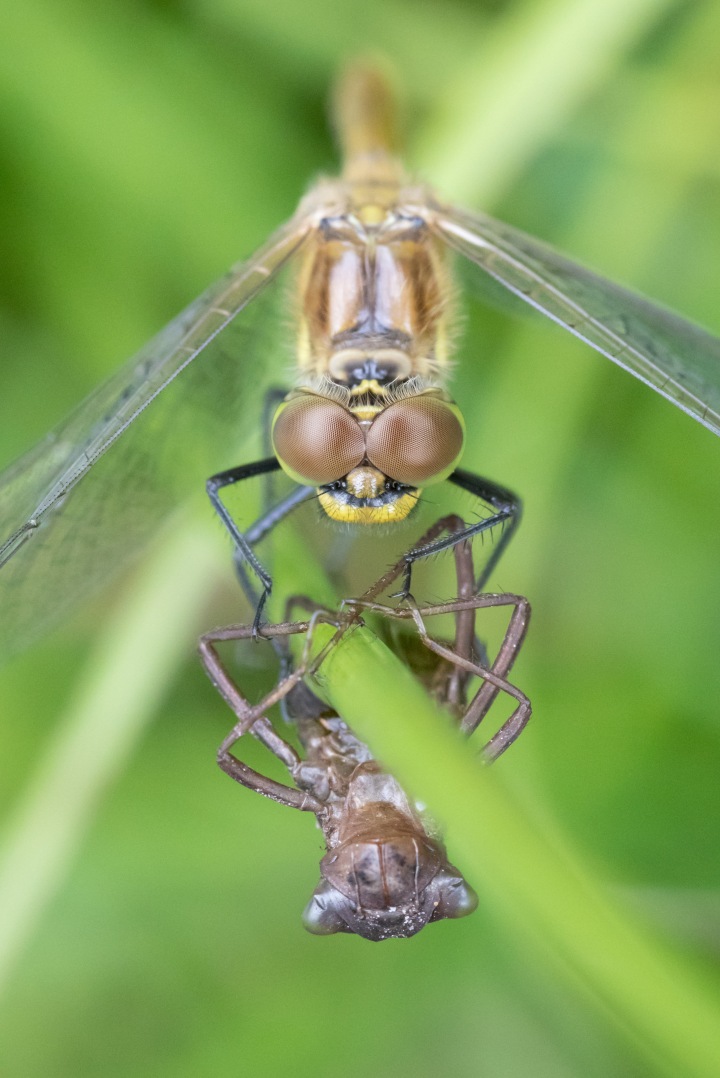 This last shot is a shot that, as I said I had in mind. One that I had imagined for quite some time before this summer even. Though, although I had faith in it being a strong shot, it turned out to be the best photo I have taken so far this year. Unfortunately that is not something I can take credit for.

I had gotten myself into position, opposite this emerald damselfly and had begun to take shots. I had corrected my settings and was just tweaking the composition repeatedly to get it as spot on as I could. Then, out of nowhere it decided to give its eyes a little wipe. This gave the photo a whole new look, it added movement, humour, character and an extra level of interest. I couldn’t be happier with this shot and think it will probably end up being my favourite shot that I take this year.

I have to say, coming away from my recent macro activities I find that I enjoy it mainly due to a combination of all the small things. The fact I can take my time, the fact I am able to experiment creatively and that I get to see new things all the time. Not that I can pronounce a lot of the new insects I find. It really has revitalised my love for wildlife and photography of all kinds.

So please, if you have an interest in wildlife and/or wildlife photography, give it a go! Most cameras have a macro setting, and if you have a DSLR you can by very cheap macro lenses second hand. All but one of the photo’s about were taken on a £80, second hand, sigma 105mm f2.8. Most lenses these days are well into the hundreds of pounds, so macro is very cheap relatively speaking. I hope you find something fascinating and let your creativeity flow!

This site uses Akismet to reduce spam. Learn how your comment data is processed.